I’ve often wondered how beneficial the backlinks were that you can purchase on Fiverr for as little as $5 when it comes to SEO. I’ve done this in the past on other blogs I’ve owned with a mixed degree of success, so I decided to write a little Fiverr backlink review, to see just how beneficial this would be to your backlink strategy. 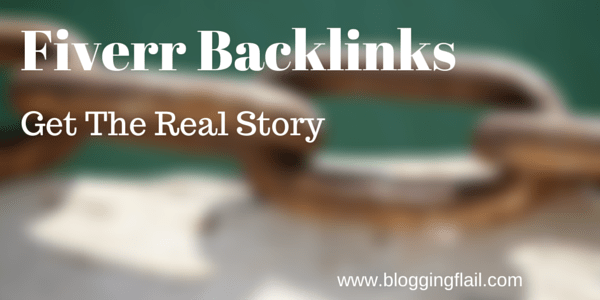 I’m sure most everyone has heard of Fiverr.com, if not I’ll give a brief overview.  Fiverr is a service that offers gigs, where you can pretty much buy anything for as little as $5. One of the attractions to this service for website owner’s, is that you can purchase links to your website or blog in a variety of different forms, all good for SEO (or so the thought goes).

You get the idea, there are literally hundreds of Fiverr backlink gigs being offered that will supposedly boost the SEO presence of your site. Is spending $5 for a Fiverr backlink worth the cost to you, lets find out.

I thought it would be interesting to do a quick test to see if see if a Fiverr backlink was worth the $5.

I have a post on another site where I’ve been playing around with different SEO strategies, and I thought this would be a good one to test a Fiverr backlink against. The post in question has been bouncing between positions 54 – 62 when doing a search in Google for my keyword, mostly hovering right around position 57.  So I’ve been trying different things to see how that impacts this result in the search engines.

I haven’t touched this post in over 2 weeks, nor have I done any back linking to the site in that same period of time. I wanted to be sure there would be nothing else that could be impacting the search engine ranking, other than the new backlink I would be receiving from the Fiverr gig.

Now I realize there are good and bad gigs that you can purchase.  Paying $5 to have someone give me 20,000 links to my site in a very short period of time doesn’t seem like something Google would be too happy with.  On the other hand, if I took the time to write a post (that contained a link back to my site), and paid someone to have that posted on their blog, that seemed a little more reasonable.

I found what I thought was a good gig.  The specific gig in question would publish a post that I wrote, that could contain one backlink to my site, on a PR6 blog that just so happened to be in my niche.  The gig had positive feedback from over 100 happily paying customers.

Results after the gig

It took just over a day to have my gig completed, and I received an email that contained the link to the site that had my post published.  After doing some research, sure enough the main domain had a PR6 showing.  I also checked a few other tools to validate the domain & page authority of the site were legitimate.
After waiting another day and verifying that my new guest post was now indexed, I anxiously checked my new SERP result – position 61. Two days later it was back at position 57.  So while I had initially lost 4 positions in the SERP’s after having my Fiverr gig completed, it seemed to settle back to its original position.  This was over a week ago, I’ve been checking my position every day since then and it hasn’t moved from there.

I expected better results from a site that claims to have a PR6 especially since it was in my blog niche. Could it have been a fake PR?  Sure, but it didn’t seem that way after I did some research.  In any case, I would have expected some bump in my rankings even if it didn’t have much of a page rank associated with it.
If you’ve had better results, I’d love to get your feedback.